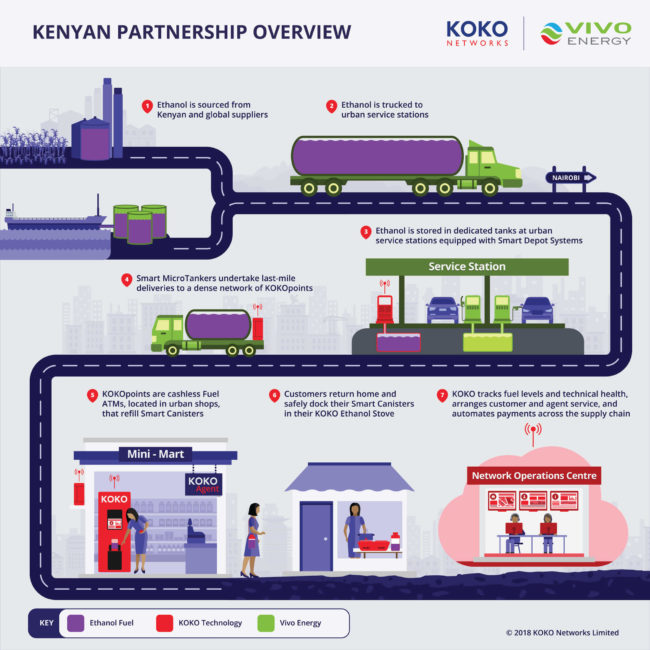 KOKO builds technology for life in the world’s fastest-growing cities. The first consumer solution on the Network is KOKO Fuel, which mainstreams access to affordable clean bioethanol cooking fuel within a short walk of all homes.

The urban cooking fuel market is worth over USD 20 billion in Africa alone, and remains dominated by dirty cooking fuels such as charcoal, which is produced through deforestation and causes millions of early deaths through indoor air pollution. KOKO’s market-leading technology platform enables bioethanol cooking fuel to scale rapidly by undercutting dirty fuels.

Customers use smart canisters that dock with KOKOpoints to dispense fuel they have pre-purchased via M-PESA. They then take their smart canister home to dock into their KOKO Cooker, a modern, high-power 2-burner ethanol stove that delivers clean heat for modern cooking at an affordable price.

KOKO’s CEO and Co-Founder, Greg Murray, commented: “Many fast-growing cities face unique challenges that innovative technology can solve. KOKO has created the infrastructure for inventing, producing and delivering hardware and software solutions that improve life in the city. Kenyans have a strong reputation for embracing innovation and we are proud to partner with the shopkeepers of Nairobi in launching our first Network.”

With the launch of this Network, KOKO now partners with 700 shops that serve as pick-up points for the KOKO Cooker, creating a low-cost e-commerce experience that has solved the last-mile challenges that typically drive up costs for customers.

With over 500 staff in East Africa and India, KOKO has developed a strong product pipeline which will see additional lines of business added on top of its Networks in the months and years ahead.