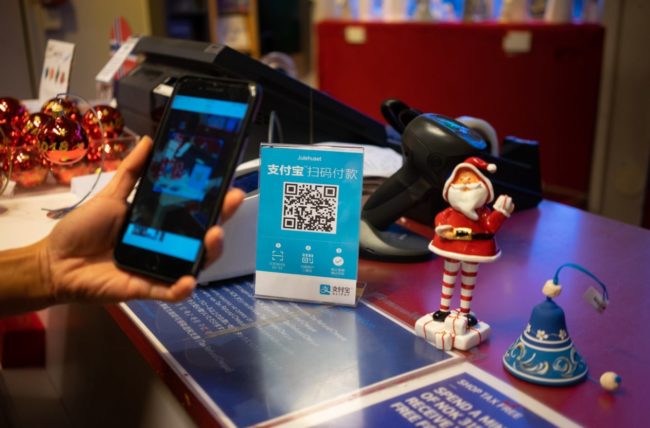 The Nordic firms Vipps and ePassi, leading smart payment providers from Norway and Finland respectively, revealed that their users will be able to use their home app to scan the QR code of the partner scheme from 2019. This will provide easier payment solutions to the existing 4 million app users when they travel, with the parties involved hoping to extend this to other European countries in due course. Vipps and ePassi created this partnership using the Alipay QR Code standard as they prepare to roll out QR Code payments for their users across their respective markets.

The partnering payment wallets serve a total of 129,000 European businesses which will benefit next year when they are able to accept QR Code payments from their domestic customers and also use the same unmodified system to welcome the payments of visitors from other Nordic countries as well as Chinese tourists.

Strong brands stand behind this collaboration of European payment wallet apps. Vipps is the most popular payment app in Norway used by over 76% of locals and has recently been named the most popular consumer brand in their home market. Finland’s ePassi is the leading Finnish mobile wallet, and also has the widest QR code compatible mobile payment network in Nordics with over 25,000 merchants accepting its payments already. ePassi has offered Alipay since 2016 as the first Nordic acquirer and also offers QR Code payments in other European countries including Sweden, Iceland, Estonia and Spain.

As part of the announcement today, Vipps has also marked its roll out of Alipay in Norway, beginning in Bergen and then extending this to more key locations across the country.

Vipps is planning to introduce the QR Code scanning feature to its own users in Norway during the first half of 2019. Norwegian businesses already benefit from QR Code payments made by Chinese tourists in Bergen. Vipps has enabled over 30 local businesses to accept Alipay payments benefiting retailers, hotels and restaurants at the key locations of the famous Fish Market and the city center which is home to the World’s Largest Gingerbread City. Vipps is planning to enable more businesses in Bergen and across Norway in preparation for the Chinese New Year tourism peak season in February.

“Bringing Alipay to Norway enables businesses to better engage with our users as they travel and explore both this country and the wider region. We are also very excited to see such prominent cashless payment leaders in the Nordics come together to empower businesses at home and abroad to connect with a wider customer group,” said Roland Palmer, Head of Europe, Middle East and Africa at Alipay.

Vipps selected Bergen as the natural launch city for Alipay since the location has grown in popularity among Chinese tourists as both a winter and summer destination. According to Innovation Norway, Chinese tourism to Norway has increased by 575% from 2007 to 2017, with Bergen and Oslo as the most visited cities.

Alipay is the world’s leading payment and lifestyle platform, and the introduction of the service in Bergen is expected to boost further tourism growth and drive greater revenues for participating merchants. A survey published by Nielsen¹ in 2018 showed that 65% of Chinese tourists use mobile payment platforms during their overseas travels, six times more than non-Chinese tourists on average (11%). In addition, the survey found that over 90% of Chinese tourists would consider using Alipay when travelling abroad if Alipay was more widely accepted among foreign merchants. Most importantly for these merchants, over 90% of Chinese tourists indicated they would increase their spending if Alipay was an accepted payment method.

“Our cooperation with Alipay gives merchants unique opportunities to accept mobile payments from Chinese tourists by QR Code scanning, as well as new marketing possibilities through the Alipay app. Bergen is just the starting point for this and we will expand throughout Norway in the coming months. Merchants who are eager to start accepting Alipay for marketing and payments with Chinese customers especially ahead of Chinese New Year can contact us directly,” explained Berit Svendsen, Head of Vipps International. “They will also be in an extremely advantageous position when we allow Vipps and ePassi users from Nordic countries to scan those same QR codes to make cashless payments via their app,” added Svendsen.

The wallet collaboration simplifies marketing and payments for Chinese tourists, with a focus on creating interoperability that also benefits users of the two Nordic payment apps. This makes it easier for them to pay at home and when they travel within the Nordics, with the anticipation of extension to other European countries in the near future.

Sparebanken Vest, the leading bank in Bergen and the region, has also been part of the process. They recognize the value of innovative and simple payment solutions to attract a growing and affluent tourist group.

“Tourism is extremely important for merchants in Bergen, and we have to offer the most innovative solutions to ensure that their needs are served. QR Code payments is an important step that ensures merchants can reach Chinese tourists, one of the biggest groups travelling to Bergen,” says Jan Erik Kjerpeseth, CEO in Sparebanken Vest.

Chinese tourists can pay with QR codes at several hotels, shops and restaurants in Bergen already, and many more will adopt the service in the weeks to come. Tourists from Norway, Finland and Sweden will have the same experience at one of their preferred tourist destinations in Norway and abroad soon.