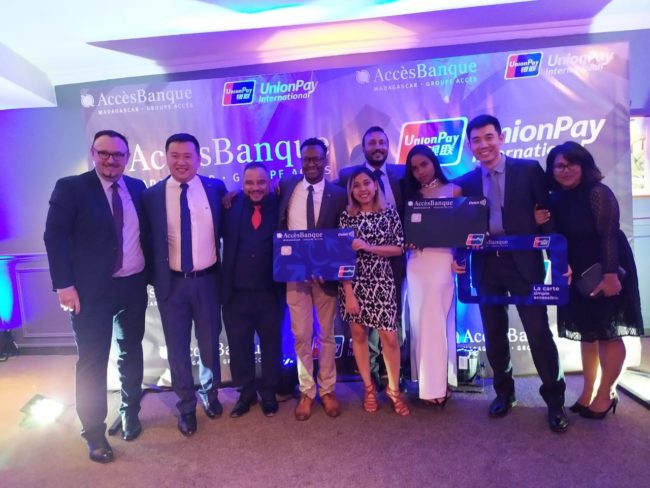 The AccèsBanque – UnionPay card, which is the first UnionPay card in Madagascar, that allows traders, businessmen, students and tourists travelling to China, Europe, America, Asia, Africa and Oceania to withdraw money through 2.9 million ATM and through nearly 55 million merchants in Madagascar and abroad.

The AccessBanque UnionPay card will reduce operational barrier for micro-entrepreneurs, by offering a very high level of security and by making the largest worldwide network of payment methods possible to customers. The customers can also access a mobile application conveniently and safely to manage their money anywhere anytime.

In addition to many financial education sessions introduced by AccèsBanque in all its intervention areas in Madagascar, the initiative to implement this card is in line with its financial inclusion policy. Indeed, the partnership will promote usual international operations in relation to 174 countries and regions, including China, of UnionPay network all over the world, a network currently composed of more than 2000 partner institutions, more than 55 million merchants, 2.9 million automated teller machines, more than 7.5 billion cards issued in more than 58 countries and regions. The roll-out of this card will then facilitate trade exchanges, not only between Madagascar and China, but also between Madagascar and other countries covered by the UnionPay network.

The card constitutes a very high level of security, which gives to its owner a specific insurance during transactions, whether withdrawal or transact. Despite its modernity, international access that it offers and the availability of funds at any time, its convenience and its competitive price on the market are making it THE card dedicated to all.

UnionPay International is a subsidiary of China UnionPay acting for the development and support of global businesses of the UnionPay. UnionPay International offers high quality of cross-border payment services, competitive and secured services to card owners worldwide and ensures convenient and swift local services to an increasing number of merchants and customers of UnionPay cards.

AccèsBanque Madagascar, a commercial bank which has been established in Madagascar since 2006, belongs to an international group, the Access Group which brings together commercial banks and microfinance institutions in 10 countries and regions in the world, whose head office is in Berlin, Germany. Its mission consists of giving to micro, small and medium sized businesses as well as to their families and employees, accessible, responsible and diversified financial services which satisfy their respective needs.

The two entities feel confident of making the right decision through this partnership. UnionPay International has once again enlarged its international network, and AccèsBanque Madagascar has managed to provide convenient, attractive, less expensive and secured tools to its customer in daily life.

18
Previous Nets and KPMG Partner to Launch AI-Powered Payment Fraud Prevention Solution
Next Banks Risk Losing US$280 Billion in Payments Revenue by 2025, According to Accenture Report