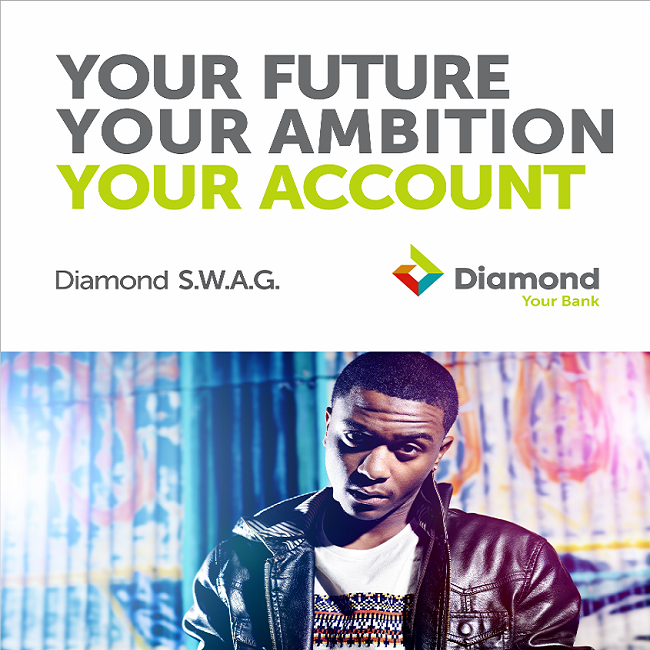 Diamond Bank, one of the leading retail banks in Nigeria, is exciting Nigerian youths with the launch of the Diamond S.W.A.G Account at the Obafemi Awolowo University (OAU), Ile-Ife venue of this year’s on-going National Universities Games Association (NUGA) games.  S.W.A.G, an acronym for ‘Student With A Goal’ is a newly designed proposition targeted at helping Nigerian youths achieve their financial goals with the right support.

Diamond Bank is the Lead Sponsor of this year’s NUGA Games, the 24th edition.

According to Mr. Victor Nwagwu, Head, Youths and School Banking Propositions, Diamond Bank, who doubles as co-ordinator for the Diamond Center at the NUGA Games, early signs show that students are excited about the S.W.A.G Account.

He said, “In just two hours that we started operations here at the NUGA, we have recorded over a hundred accounts opened and funded and more are expected before the close of work as many of the students are making efforts to conclude with the account opening requirements. The responses are quite encouraging”.

Nwagwu explained that all one needs to open the S.W.A.G Account is to complete the account opening form, attach a student ID/NYSC ID and one passport photograph. He added that some interested students have been recruited by the Bank as Direct Sales Executives to effectively drive the sales of Diamond S.W.A.G among the youths.

Oluseyi Afolabi, a student of Law at the Obafemi Awolowo University and one of the DSEs and corroborated Victor’s position that students have quickly warmed up to the S.W.A.G Account.

She said: “So far I have given out about fifty forms and already twenty of them have responded while I’m still expecting the others to respond. So far the guys I have spoken to are favourably disposed to the idea”. She expressed gratitude to Diamond Bank for the opportunity to make quick money while the NUGA Games last.

Some of the students who subscribed to the account equally expressed delight at the freebies they get for signing up for the Diamond S.W.A.G Account. These include a zero Naira account opening balance and the opportunity of getting N1, 500 call credit upon referring five people to subscribe to the account.

One of such students is Olawuni Tolulope, a student in the Department of Psychology, who said he subscribed to the account as soon as it was introduced to Artistes visit for D. SWAG Concerthim. He described the freebies as exciting.

He said, “The benefits of the Diamond SWAG account are quite exciting. I walked into the place and opened the account in less than fiften minutes; I have not had it like that before. I think I love the idea of getting a debit card that I can use for international transactions as soon as I fund the account with N1, 000”.