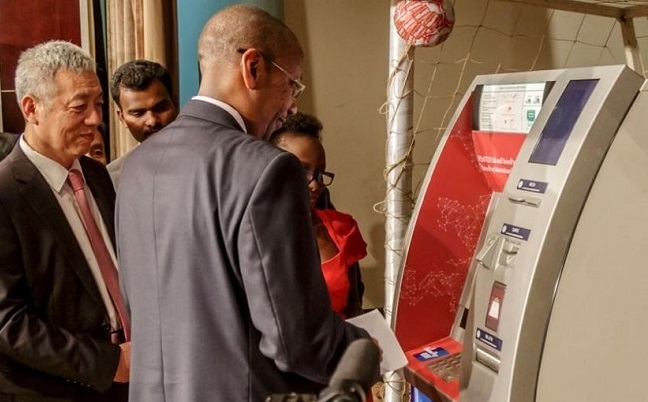 There is a great sense of relief and optimism among bankers and the business community that the cost of transaction could further come down following a partnership seal between RSwitch and a China-based money transfer firm, UnionPay International.

The two firms signed a partnership deal that will allow anyone with a UnionPay card to withdraw money via RSwitch Automated Teller Machines (ATMs) and vice versa.

The arrangement has since excited the business community, especially importers, with many calling it a timely shot that will help drive the country toward a cashless economy.

It means that those travelling, especially between Rwanda and China, will no longer have to carry money but rather their ATM cards, thus fostering the concept of a cashless economy.

This could actually reduce not only the cost of money transactions but also enhance competiveness in the financial industry.

According to Mohamed Mazimpaka, the chairperson of the Chamber of Commerce at the Private Sector Federation, promoting a cashless economy is vital for the survival of the financial sector.

“This particular initiative between UnionPay International and RSwitch is a stepping stone that will not only help us as the business community but also the financial sector as a whole. Technology is evolving and we must leverage it to reduce the cost of doing business and become more profitable,” Mazimpaka said.

The deal, for example, builds an acceptance network aimed at bringing cardholders convenience, to provide issuers in local markets with a more affordable and flexible alternative solution than the other players.

And all banks whose ATMs are powered by RSwitch, including Cogebanque, Zigama CSS, UOB, Development Bank of Rwanda (BRD), GT Bank, I&M and Access Bank, will automatically acquire UPI cards.

According to John Rwangombwa, the governor of the National Bank of Rwanda (BNR), it’s a perfect idea and a great step forward that will not only promote a cashless economy but also drive the country toward financial inclusion.

This is important because statistics from the central bank indicate that, last year, only $36 million was transacted using electronic payment points of sale, reflecting only 0.45 per cent of total transactions made in the country.

This, according to Rwangombwa, is very low compared to, for example, Kenya, where the transactions through the same medium represented 1.7 per cent.

He said the capacity to improve exists and only needs to be reinforced by such partnerships.

“We are really committed to promoting and continuing investing in cashless economy because we believe it’s through electronic payment systems that will help drive a cashless payment economy and help propel the economy towards 100 per cent financial inclusion,” Rwangombwa said.

There has been a lot of progress achieved as far as electronic-based payments are concerned, which makes many experts agree that the country’s efforts towards a cashless economy are paying off.

Therefore, with RSwitch now in partnership with one of the world’s best payment system, many experts believe it is a step that will help establish convenient payment services.

And, to the Chinese enterprises, it simply means faster transactions whenever they are in Rwanda.

According Daniel Barrientos, the chief executive of RSwitch, the deal could be the spring board for Rwanda to become a financial hub in the region.

“It also means that we will be able to provide world-class payment solutions to our customers,” Barrientos said.

Many experts agree that, it’s another opportunity for expanding global acceptance network and leveraging flexible fees and pricing structure.

And such a network could actually help facilitate the expansion of financial services and ecosystem in the country and the region at large.

It’s a perfect match that will help increase the usage of electronic money, Fulgence Bigirimana, a Kigali-based businessman and importer, said.

Shen Yongxiang, the Chinese Ambassador to Rwanda, said this particular deal will enhance trade between China and Rwanda.