Number of Card-accepting Outlets Set to Double by 2020 – Can Visa and MasterCard Keep Up?

The number of merchant outlets worldwide accepting card payments is set to double from 46.6 million at the end of 2014 to 90.3 million by 2020. This is one of the findings in RBR’s new report, Global Payment Cards Data and Forecasts to 2020. While Visa and MasterCard are currently accepted at 78% of outlets worldwide, it is unclear whether they will be able to maintain this level, as most of the growth will be in China, where they are only accepted at 29% of outlets.

Discover is closing the acceptance gap on Visa and MasterCard

Discover’s acceptance network outside of China is significantly smaller than that of Visa and MasterCard. As a result of its scheme-to-scheme agreement with UnionPay, however, its total worldwide network is nearly the same size. The US scheme has similar deals with JCB in Japan and BC Card in South Korea.

In most countries, Diners Club is accepted at the same number of outlets as Discover, China being the main exception.

UnionPay is the fastest-growing scheme in terms of the number of outlets, having increased by 25% with 5.7 million new outlets in 2014. The main driver of this growth is the expansion of the scheme’s home market of China, where it added 4.4 million outlets. UnionPay’s level of international acceptance is critically dependent on network-to-network agreements, most notably with Discover in the USA and JCB in Japan – any changes to these agreements, or the addition of any new agreements, would therefore have a major impact on the size of its overall network.

The number of merchant outlets worldwide increased by 17% in 2014 and the fastest growth was seen in Asia-Pacific, followed by central and eastern Europe. In these two regions, acceptance is expanding to geographic areas and merchant sectors where consumers could not previously use cards, rather than remaining in just the largest merchants and cities.

Asia-Pacific is already the largest region in terms of the number of outlets, and RBR is forecasting growth to remain strong until at least 2020. Large but as yet underdeveloped markets such as China and India provide significant potential for further growth, and the overall density of outlets is much lower than that of North America. Asia-Pacific currently accounts for 42% of global outlets.

Latin America is also set to grow quickly, particularly in rural areas, where there are a large number of merchant outlets which do not yet accept cards. In other regions, however, growth is likely to be slower owing to the maturity of a number of markets. 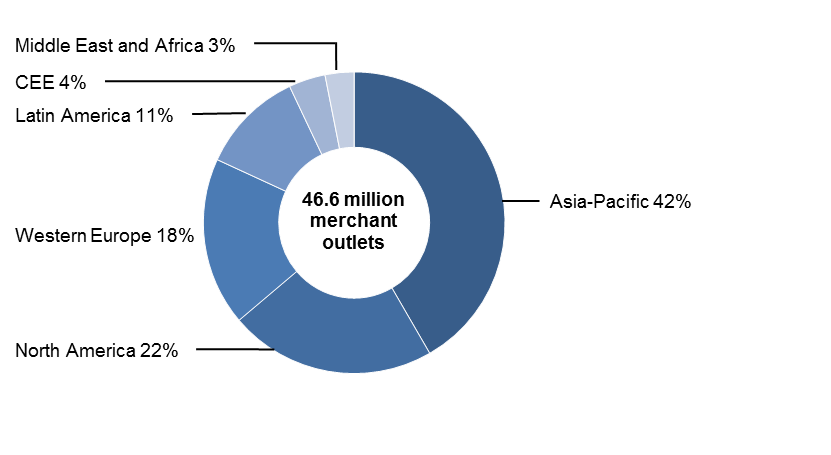 Contactless will boost card acceptance, but mPOS poses a threat to traditional terminals

Card acceptance has been boosted by the addition of contactless technology to EFTPOS terminals and this is set to continue. Retailers have deployed contactless-enabled terminals to replace more traditional units, and acquirers see contactless as a key tool in their attempts to increase card acceptance among low-value sectors. As a result, contactless card acceptance is becoming more common in outlets such as pharmacies, cinemas, restaurants and coffee shops.

RBR’s research shows that mPOS solutions are becoming more common across the world and are likely to play a key role in increasing card acceptance, particularly in merchant sectors where traditional card acceptance may not be cost-effective. Although mPOS is often used in locations that would otherwise not accept card payments, there will also be deployment in traditional EFTPOS sectors which will impact the growth of EFTPOS terminals.

Growth of card acceptance set to continue, at least in developing markets

The recent expansion in card acceptance worldwide shows no sign of stopping as banks in less mature regions such as Asia-Pacific, Latin America and the Middle East and Africa continue to attract new customers and encourage all consumers to use cards as a replacement for cash. In contrast, in more developed markets it remains to be seen to what extent acquirers can further expand their acceptance networks given the relatively saturated EFTPOS market – in the markets with the highest penetration levels, further growth will have to come from mPOS.