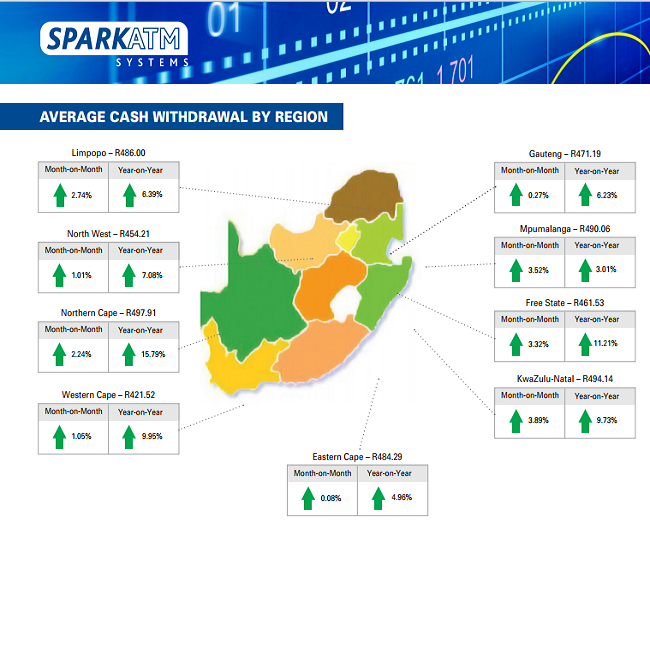 These provinces have higher withdrawal amounts due to the remittance income that flows from the metro areas to the rural areas of these provinces. The Northern Cape also displayed the highest year-on-year growth rate of 15.79%.

KwaZulu-Natal recorded the highest growth in month-on month withdrawal value of 3.89%, followed by Mpumalanga which recorded a 3.52% month-on-month increase.

Wholesale locations recorded the highest cash withdrawal value (R485.74) for August 2013 for the seventh month in a row, with a month-on-month increase of 1.78%. Goods purchased from wholesalers also contribute to the sustenance of SASSA card holders, who find better value for their money at these types of outlets, and many of Spark’s new installations have taken place at cash and carry–type wholesale outlets.

Petrol sites recorded the second highest average cash withdrawal value (R474.62) for August 2013, the second highest month-on-month increase of 2.47%, and the highest year-on-year growth of 9.05%. “The increased withdrawal data at these locations is attributed to the recent fuel price increases, and consumers therefore having to make larger withdrawals when refuelling,” says Sternberg.

Retail locations recorded the highest month-on-month increase of 3.00%, and the third highest cash withdrawal value of R455.55. This has normalised following a decrease in July of 3.74%, but is also attributed to the end of winter sales promotions at retail locations in August. Both farming and leisure locations recorded month-on-month decreases of 3.96% and 2.23% respectively, representing the lower levels of activity in these outlets during the winter month of August.

The continued rise in the use of the South African Social Security Agency (SASSA) debit cards as a means of paying social grants in South Africa has had a significant impact on the country’s Automated Teller Machine (ATM) landscape and has further entrenched cash as the preferred method of transacting for local consumers.

“SASSA cards now represent 14% of our transaction volumes, up from nil just eighteen months ago. The introduction of these cards represents a huge injection of new customers into the formal banking and ATM system,” says Marc Sternberg, Managing Director of Spark ATM Systems.

He explains the SASSA card allows beneficiaries to access their social grant anywhere in South Africa using traditional banking channels, such as ATMs. “This has in turn driven significant demand for convenient ATM services, with Spark installing a record 496 ATMs in the first eight months of 2013. A majority of Spark’s ATMs were installed in rural and peri-rural areas and the strong demand for cash by the previously unbanked is reflected in the withdrawal volumes we have recorded on these rural ATMs, particularly on SASSA transactions.”

According to Sternberg, the flood of almost 10 million new SASSA cardholders into the system has resulted in the peak ATM withdrawal day for the entire ATM industry moving from the last Friday of the month to the SASSA grant day, which is the 1st of the month, creating huge queues at retailers and at ATMs countrywide. He adds that many of Spark’s merchants who host ATMs, have expressed their desire for the SASSA payments to be staggered across multiple days to alleviate the strain on their businesses and to ensure the social grant congestion does not coincide with month-end, which is already the busiest time of the month for them.

The Spark ATM Systems’ data suggests that it is consumers at the lower end of the income spectrum that are driving the higher cash withdrawal volumes.

This view is backed up by a recent FinScope survey, which revealed that the introduction of the new SASSA card system contributed to the significant increase in the banked population, particularly at the bottom of the pyramid, where ATM/debit card usage increased from 52% in 2011 to 61% in 2012.

Sternberg says this data indicates that cash is still very much the dominant payment method in the South African economy and that the demand for ATMs continues to grow despite the other electronic payment options available to consumers.