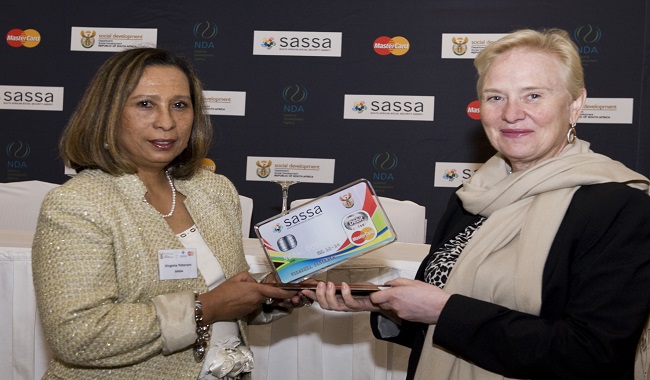 This milestone marks the conclusion of the re-registration phase of the project, with social grant beneficiaries having received their new Debit MasterCard cards with biometric functionality, issued by Grindrod Bank in association with SASSA and Net1 UEPS Technologies (Net1).

Since March 2012, just under 22 million social grant beneficiaries have re-registered onto the new system introduced by SASSA to minimise fraudulent grant applications and collections and reduce grant administration costs by distributing all grant payments electronically.

A crucial feature of the SASSA card’s biometric functionality is that it positively identifies social grant recipients using unique identifiers such as fingerprints, voice and other personal information, which means that the SASSA cards cannot be used by any person other than the approved beneficiary to collect his/her grant.

“A key driver of the new system was to put stringent measures in place for SASSA to ensure that only qualifying grant recipients – those really in need – are authorised to receive one of seven grants that SASSA offers. Between April 2012 and June 2013, over 150,000 grants were cancelled, which has led to a saving of R150 million (about US$15.1 million) per annum,” explained Virginia Petersen CEO, SASSA.

By simply moving all grant payments from largely cash payments, which were costly, cumbersome and riddled with inefficiencies, to electronic payments, the new system has already saved SASSA a considerable amount in grant administration costs. Before March 2012, it cost SASSA on average R33 (US$3.33) per grant to pay beneficiaries. Under the new system, disbursement costs have been capped at R16.44 (US$1.66) per payment.

To mark the occasion, Ann Cairns, President of International Markets, MasterCard presented SASSA with a commemorative award to acknowledge SASSA’s world-leading social grants payment progamme on her visit to South Africa to celebrate the milestone achievement.

“By supporting the South African government in the implementation of a cost-effective electronic payments programme, we are helping them save money, improve efficiencies and prevent fraud,” said Cairns. “More importantly, we are opening up a world of financial inclusion to millions of South Africans who haven’t previously had access to traditional financial services.”

Between March 2012 and July 2012, the SASSA Debit MasterCard card was cited as the main contributing factor to the 4% growth in the country’s banked population from 63% in 2011, to 67% in 2012 according to the FinScope South Africa 2012 survey. As at July 2012, 2.5 million SASSA MasterCard cards had been issued to grant recipients. Since then an additional 7.5 million cards have been issued to grant recipients which should further increase financial inclusion in South Africa.

“Millions of South Africans lack access to the most basic financial tools. They don’t have secure places to save money or reliable means to transfer it and use it for transacting. Through the introduction of the SASSA Debit MasterCard card, nearly one fifth of the South African population now benefits from having a formal banking product, helping them build a stronger future for themselves, their families and their communities,” said Cairns.

As part of the SASSA re-registration process, each recipient has a bank account opened for them, which is offered free of monthly charges by Grindrod Bank. Recipients can deposit funds into their bank account via electronic funds transfer (EFT) or third party bank transfer.

The SASSA Debit MasterCard card can be used anywhere MasterCard cards are accepted, and grant recipients can make purchases, check their account balances and withdraw cash at till points without incurring transaction charges at selected South African retailers. Recipients can also withdraw cash at any ATM, which does however attract transaction charges.

“Ten million cards distributed to grant recipients in just 17 months is an outstanding achievement. What is more remarkable, however, is the impact that the SASSA Debit MasterCard card has had, and will continue to have, on the lives of the grant beneficiaries, and on the national economy in general,” said Cairns

“It is our goal to continue to introduce innovative payment solutions that help make transacting quicker, safer and more convenient for everyone, everywhere and whenever needed, and to realise MasterCard’s vision of creating a world beyond cash,” she concluded.