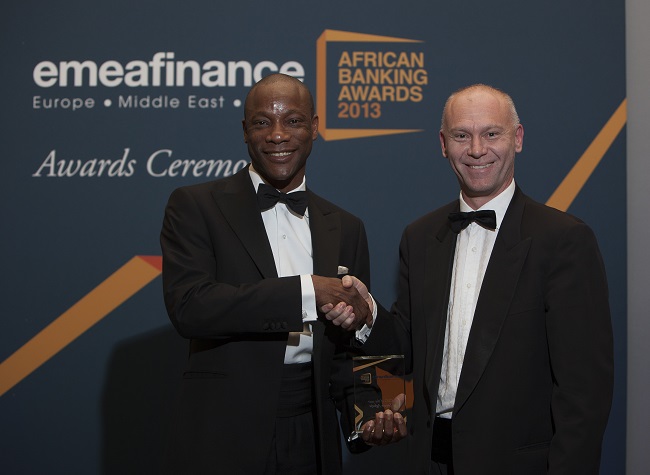 The Managing Director/CEO of Guaranty Trust Bank plc, Segun Agbaje has been announced as the 2013 Pan Africa- CEO of the Year award winner by EMEA Finance, United Kingdom.

Hosted by EMEA Finance; the leading bimonthly global industry publication that reports on major financial events influenced by the international financial industry active in Europe, Middle East, and Africa,the award was announced at a prestigious dinner held in London to recognise the achievements of outstanding CEOs and the contribution they have made to their organizations.

The Pan Africa- CEO of the Year Award is bestowed on outstanding Managing Directors who have achieved the most with regards to innovation, profitability, Corporate Social Responsibility and sustainability of their organization. The award also takes into recognition an individual that has been an influential and inspirational leader, has overseen strong financial performance for his organization through leadership and vision and has successfully guided his institution to new heights in the industry.

According to Tim Burke, the Editor of EMEA Finance, “With two decades of banking experience, Mr. Agbaje has demonstrated his invaluable insights into the factors that drive success in this industry. His leadership has not only helped GT Bank to grow its market share and profitability during recent years, but also to take the bank into new markets”.

Commenting on his achievement, Managing Director/CEO of Guaranty Trust Bank plc, Segun Agbaje said “I am honoured and humbled by this award, I am particularly fortunate to work with a strong team of passionate and dedicated people at GTBank, all of whom have played a core role in delivering the Bank’s successful result over the past years”. He further stated that the award is in recognition of the hard work, discipline and commitment of the Board, Management and Staff of Guaranty Trust Bank plc.

Mr. Agbaje is a well respected professional with over 20 years experience in various areas of banking. He has led the Bank to become the most profitable and respected Bank in Nigeria as a result of his belief in excellence, discipline and long term strategic business planning. In addition, the Bank has continued to consolidate its position as a foremost African brand through enviable financial performance, adherence to the highest corporate governance principles and the introduction of innovative products and services. Mr. Agbaje was also conferred with the 2013 African Banker of the Year Award by African Banker Magazine earlier in the year.

In recognition of his contributions, Guaranty Trust Bank has been the recipient of several awards. The most recent awards include; the 2013 Best Banking Group – Nigeria by World Business Leader Magazine and the 2013 African Bank of the Year from African Banker Magazine.