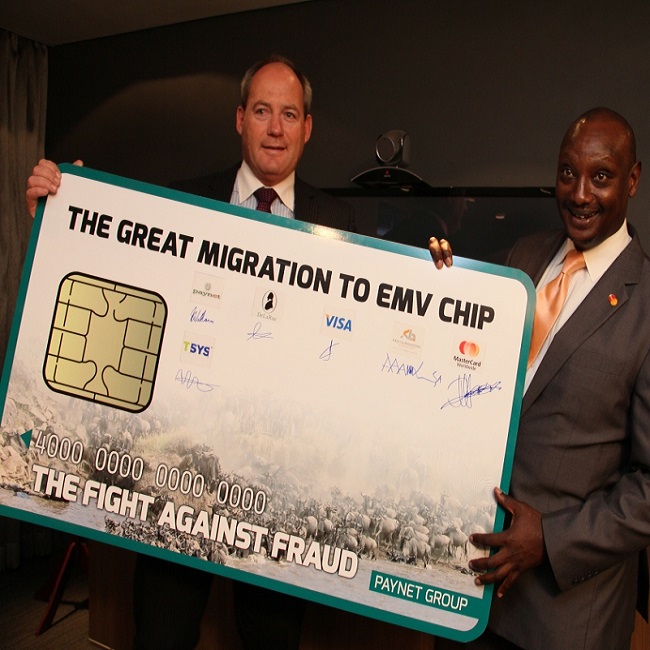 MasterCard has signed a deal with regional card processor Paynet Group to partner in a local initiative geared towards encouraging the switch from magnetic strip to EMV cards.

Dubbed “The Great Migration to EMV Chip,” the local initiative brings together various stakeholders in Kenya’s banking and payments technology sectors in an effort to hasten the switch to EMV cards. EMV, an acronym for Europay, MasterCard and Visa, is the globally accepted standard for enhanced card payments security.

Paynet has been training bankers on the benefits of chip and PIN cards, a programme that has also seen different players in the industry educated on the various models they can use to migrate to EMV before the March 2014 deadline set by the Kenya Bankers’ Association (KBA).

Speaking during the signing ceremony, Paynet Chief Executive Bernard Matthewman said that the rising instances of card fraud had caused concern in the industry, as banks continue to experience high levels of fraudulent card transactions.

“It is important that we move rapidly to safeguard consumer confidence. We believe the partnership with MasterCard today and the joint effort of all other stakeholders in “The Great Migration to EMV Chip” will further grow the momentum of the campaign and enable this market reap the benefits of a highly innovative and secure card payments industry,” he said.

According to statistics from the Banking Fraud Investigations Department (BFID), financial institutions lost an estimated Sh.1.49 billion to fraud between April 2012 and April 2013. While the losses were not all attributed to card fraud, the increase in card usage especially among the middle class has necessitated the formulation of tougher measures to fight fraud, making the case for the adoption of the more secure chip and PIN cards.

“Kenya has recorded impressive growth in card usage in the last two years, with the value of card transactions rising over 74 per cent to one trillion shillings between January and December 2012 alone,” said James Wainaina, Vice President and Area Business Head for MasterCard in East Africa. “But while we celebrate these gains, we also recognise that to maintain our momentum we must do everything within our power to put in place measures that make it impossible for fraudsters to operate, and to constantly assure our customers that their card transactions are safe. As a global company, our endorsement of “The Great Migration to EMV Chip” campaign demonstrates our resolve and purpose to work with like-minded stakeholders to defeat rising card fraud.”

Magnetic strip cards, which feature a black magnetic strip at the back and have been in circulation since the 1960’s, comprise about 98% of the estimated 10.5 million debit, credit and ATM cards in circulation in Kenya. In contrast, EMV cards feature an embedded microchip to encrypt information, making it more difficult for unauthorized users to copy or access data on the card.

As part of its efforts to drive the migration to EMV, Paynet Group recently invested in an EMV card issuing and processing facility in Nairobi that will be able to support local banks opting to outsource their card operations, which is a cost effective model for the migration to the EMV standard by banks.

16
Previous MasterCard and The Leading Hotels of the World to Offer Cardholders Special Benefits
Next Capitec, FNB and Nedbank Bank Accounts Most Popular with South African Consumers