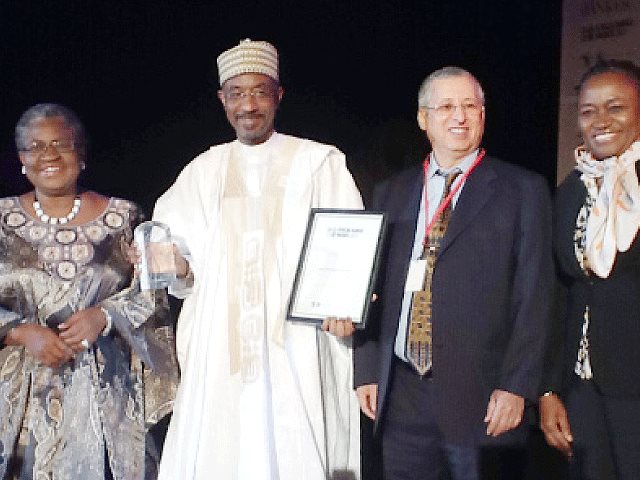 The Governor of the Central Bank of Nigeria (CBN), Mallam Sanusi Lamido Sanusi, CON, has been conferred with the 2013 Africa “Central Bank Governor of the Year” Award by the renowned IC Publications Group, in collaboration with Business in Africa Events, at Marrakech, Morocco.

The Central Bank Governor’s Award, which is the third for Sanusi in three years, was presented to the CBN Governor on Wednesday, May 29, 2013, at the African Banker Awards gala dinner held at the impressive Taj Palace, Marrakech, Morocco.

According to the Publisher, African Banker and Managing Director, IC Events, Omar Ben Yedder, the award is in recognition of Sanusi’s remarkable leadership role and consistent contribution to banking reforms in Nigeria, which have inspired his peers to emulate him across the continent of Africa and beyond.

“The African Banker Awards Committee has commended you (Sanusi) on your outstanding work in the past years in sustaining reforms; ensuring macroeconomic stability, protecting the independence of the Central Bank and enhancing many aspects 2of Nigerian Banking adoption of new technologies for financial inclusion; continuous modernization and more transparent disclosures including adopting higher reporting standards to banks”, he said.

The organizers of the award, which has the African Developmet Bank Group as its official patron, noted that the latter reforms championed by Sanusi are having an impact not only on the banking industry but also on the country as a whole.
“The Awards Committee has also highlighted that you have been continuously singled out by many of your central banking peers, international bankers, investors and development partners as a reformist Governor with integrity, candour, energy and exceptional courage,” Yedder added.

The Committee emphasized that Africa’s improved reputation was attributable, largely in part, to the efforts of leaders such as Sanusi, who as Central Bank Governor has made exceptional contributions to the economic and social development of the African continent.
In his acceptance speech, Mallam Sanusi attributed all the successes recorded under his leadership as the CBN Governor to the team work of all staff of the CBN as well as the continued support of the Federal Government and the National Assembly.
While noting that there had been challenges along the way, he expressed confidence that the Central Bank of Nigeria, and indeed Central Banks around the continent, will continue to ensure macroeconomic stability, which central bankers beyond the shores of Africa could emulate. According to him, the award would provide him and his team the impetus to drive the reforms needed to enhance sound economic development and growth.

It will be recalled that Sanusi, who will be four years in office as CBN Governor in June
2013, anchored his globally commended reforms in the Nigerian banking and financial sector on four pillars: Enhancing the quality of banks, establishing financial stability sector, enabling healthy financial sector evolution, and ensuring that the financial sector contributes to the real sector of the economy.

The African Banker Awards is co-founded and co-organised with Business in Africa Events. The annual event, held alongside the African Development Bank (AfDB) annual meetings, was graced by Central Bank Governors, Finance Ministers and Bank Chief Executive Officers from across Africa and beyond.