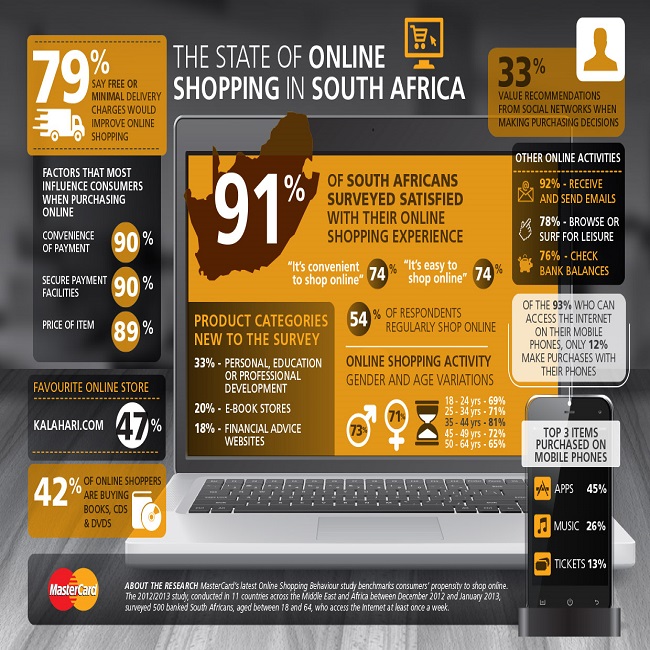 The latest MasterCard Online Shopping Survey has revealed that a substantial 91% of South Africans who shop online are highly satisfied with their overall experience, a 4% increase from the 87% who said the same thing in the 2012 survey.

A further indication of South Africans’ positive sentiment for online shopping is that 76% of respondents return to an online shopping site that they have used before and 74% expressed that they felt it was both easy and convenient to make online purchases. These figures show slight increases – 2% and 1% respectively – when compared to the previous survey’s results.

Despite this positive sentiment towards shopping online, the number of South Africans accessing the Internet to shop online is down 4% from the previous survey, with 54% of respondents saying that they usually use the Internet for shopping.

“While online shopping continues to be a regular Internet activity for more than half of South Africans who are actively online, there is a slight shift downwards in their online purchasing behaviour, which could be attributed to the slowdown recorded in the economy during the survey period,” says Philip Panaino, Division President, MasterCard, South Africa. “This is supported by The South African Reserve Bank noting in its fourth quarter review of 2012 that retail activity was disappointing as consumer spending was negatively affected by a pickup in inflation.”

“There has been a rapid rise in the number of South Africans classified as active Internet users – those who fairly recently acquired regular access to the Internet – which means we are seeing a larger-than-ever base of users who have never shopped online before,” says Arthur Goldstuck, Managing Director of World Wide Worx.

“These users add to South Africa’s population of more experienced Internet users – those who have been online for five years or more – which has increased significantly from under four million in 2012 to around 4.6 million this year. This means that even as the amount spent online keeps rising steadily – at more than 30% a year according to our data – the proportion of users shopping online is declining, which ties in with the decline MasterCard has recorded of active online shoppers here.

“The key therefore lies not in the total number of Internet users, but in the behaviour of the experienced users,” notes Goldstuck. “And as the new user base gains experience and confidence in online activities, their propensity to shop should convert into a regular online shopping habit.”

Now in its third year, the annual survey, which serves as a benchmark that measures consumers’ propensity to shop online, was conducted in 11 countries across the Middle East and Africa[1] region between December 2012 and January 2013. The South African report surveyed banked South Africans aged between 18 and 64, who access the Internet at least once a week. They were asked questions about their online shopping habits. The survey and its accompanying reports do not represent MasterCard’s financial performance.

South Africans were clear about what sways their online purchasing decisions, with 90% of respondents noting that secure payment facilities and convenient payment methods were the most important considerations when making an online purchase. Eighty-nine percent said that the price of the items to be purchased was a leading consideration, while 86% said that low or no extra charges for delivery or shipping played a role in the decision to shop online.

“Even though shopping online means that consumers are spared the inconvenience of parking, queues and crowds, they still prefer online stores that offer extra added value, with 65% of respondents indicating that promotional offers, discounts or free gifts are important when it comes to choosing an online retailer,” says Panaino.

When asked how online shopping could be improved in future, free or minimal delivery or shipping charges topped the list. Stated by 79% of shoppers, this was the most sought-after improvement by a significant margin. The next most popular suggestion made by half the respondents was that online purchases should not incur additional service charges.

Nearly half of the respondents said that their favourite online store is Kalahari.com, with the next most popular sites being Groupon, Amazon, Bid or Buy and Takealot. Of those who have shopped online in South Africa, only 29% of their purchase occasions have been from foreign sites, down from 34% in the previous survey.

Websites selling books, CDs and DVDs remain the most popular, with 42% of respondents having visited these sites in the last three months. Home appliances and electronics take second place (35%)

Suggesting that shoppers are becoming more accustomed to paying for knowledge or information online and consuming it digitally, sites offering personal or professional education were the third most popular genre of websites visited by 33% of respondents – interestingly this was the first time this category was added into the survey. Travel (32%) and coupon/deal sites (31%) were also cited as popular categories for online shoppers.

The survey also revealed that mobile banking apps are popular in South Africa, with 29.2% of those with Internet access on their mobile phones already using them, and the majority (44%) being familiar with the technology.

“It is anticipated that the advent of transactional apps and the rapid rise of smartphone usage in South Africa will have a significant impact on online shopping in the coming years,” says Goldstuck. “Mobile commerce is still in its infancy, but as it is made easier, and as users become more familiar with the concept, it will rise at the same rate as web-based online retail.”

“Online shopping has come a long way in South Africa as access to the Internet has increased exponentially over the past few years, all the while becoming more cost-effective. Online shoppers are positive about their experiences, and believe this method of retail therapy is easy and convenient,” Panaino says.

“As online shopping becomes more of the norm for consumers, online retailers must continue to be cognisant of the suggestions and feedback from their customers so as to constantly improve their offerings and further enhance the overall online shopping experience,” he concludes.