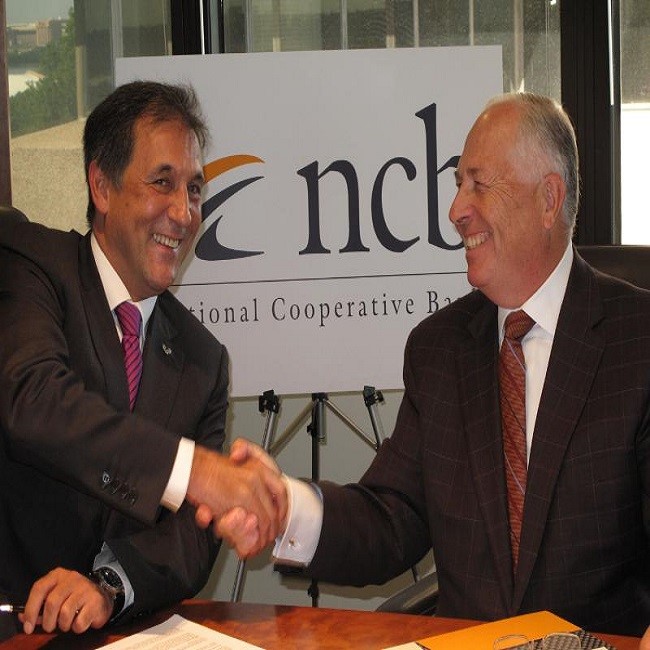 The Mondragon Bank and National Cooperative Bank to Partner in Cooperatives

The world’s largest industrial, worker-owned and run cooperative, Mondragon, founded in the Basque region of Spain over fifty-five years ago and winner of the 2013 Financial Times “Boldness in Business” award has agreed through its cooperative bank, Laboral Kutxa, to partner and build cooperative stakeholder businesses in local living economies throughout America with the U.S. based National Cooperative Bank headquartered in Washington, D.C.

For the first time in their respective operating histories, both Mondragon’s Laboral Kutxa and National Cooperative Bank (NCB) will collaborate to support each other’s banking customers including subsidiaries of cooperatives operating in the United States belonging to the Mondragon Group. Predicated on similar “doing well by doing good” principles, social responsibility values, and a growing understanding that cooperative markets extend beyond borders, both entities pledge to support each other’s customers with regard to charges, payments, financial services, online banking systems, and other commercial banking practices.

National Cooperative Bank fulfills its singular mandate to strengthen America’s cooperatives, their members and other socially responsible organizations through the delivery of social impact banking products and services. NCB’s customers are cooperatives such as grocery wholesaler co-ops, food co-ops, purchasing co-ops, credit unions and housing co-ops who share in the spirit of joining and working cooperatively to meet personal, social, and business needs. Headquartered in Washington, DC, NCB has offices in Alaska, California, New York, Ohio and Virginia.

Laboral Kutxa of Mondragon, the financial cooperative arm of the Mondragon Group, is a cooperative bank fielding 450 branches with over 1,300,000 customers. Mondragon is the world’s largest worker-owned industrial cooperative but also the top Basque region industrial group, ranked tenth in Spain with 80,000 personnel, a presence in 70 countries, and expanding operations across the U.S. and North America.

The NCB-Laboral Kutxa Memorandum of Understanding frames the general terms and conditions for the cooperation between both parties, based on subjecting each future transaction to a specific contract with market-driven competitive performance goals. This partnership intends to exchange best practices and experiences in social and solidarity-oriented high impact lending and to support international initiatives for the accelerated development and promotion of the global cooperative sector.

Both Mondragon’s partnership with National Cooperative Bank through the Mondragon Bank, Laboral Kutxa, and its union-coop model collaboration with the United Steelworkers reflect the ten basic principles that Mondragon co-operatives have put into practice during the past fifty-five plus years (open admission, democratic organization, sovereignty of labor, instrumental and subordinate nature of capital, participation in management, wage solidarity, inter-cooperation, and education). Fully compatible with the UN Principles for Responsible Investment, the National Cooperative Bank – Laboral Kutxa partnership intends to promote investments and businesses essential for revitalizing local productive economies and renewing community prosperity.