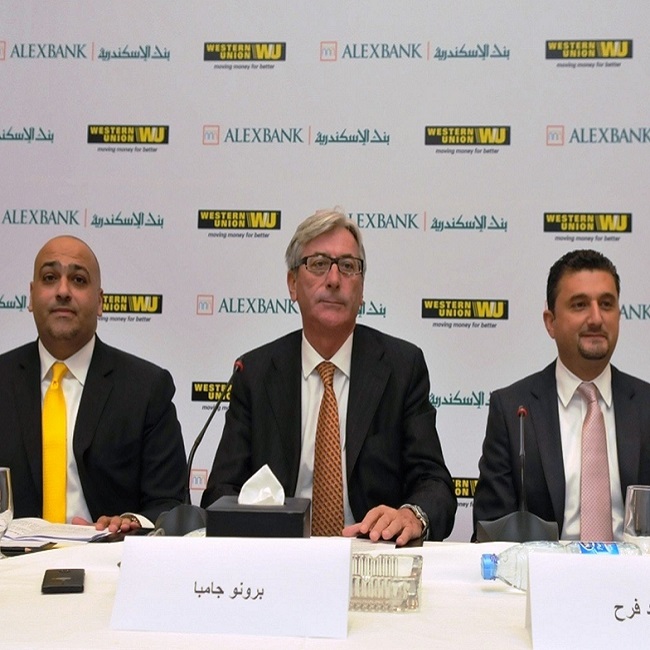 Egypt accounts for over 40 percent of total remittance inflows to the MENA region and the country saw a six-fold increase in remittances over the last eight years to become the largest recipient ahead of Lebanon, Morocco, Jordan and Tunisia according to the World Bank.

Under the agreement, AlexBank will initially provide the service in 50 select branches across the country from where customers can send or receive money; the number of branches will be increased to over 120 by the end of Q1 2014.

Jean Claude Farah, Western Union’s Senior Vice President, Middle East and Africa said, “Western Union connects consumers in some of the most remote corners of Ege rest of the world by maintaining an unsurpassed agent network of over 90 locations across Egypt; and 515,000 retail locations in 200 countries and territories. This agreement with AlexBank consolidates our market presence, taking our agent locations to over 200 owing to their nationwide network of branches. Over 6 million Egyptians live abroad[1], a number that’s continuously growing, and so is the need for a money transfer service that’s reliable and easy to use but also convenient in terms of accessibility for the sender and the receiver.”

Bruno Gamba, Chairman of ALEXBANK, added, “Western Union represents the latest in the Intesa Sanpaolo Group’s continuous efforts to provide world class services throughout our network. Both entities, with the support of the Central Bank of Egypt, have put in a tremendous effort to bring this to light.”

Hatem Sleiman, Western Union’s Regional Vice President, Near East, Egypt, Saudi Arabia and Sudan said, “Remittances are an essential source of income for migrant families, meeting as much as 40 percent of household expenses[2]. With nearly two decades of experience in providing money transfer services in Egypt, we see the need to extend our services to as many consumers as possible by growing our agent base and number of locations. This alliance with AlexBank is a clear example of two leading entities collaborating to meet the growing needs of consumers. I would like to thank the Central Bank of Egypt for their support and cooperation in enabling us to bring money transfer services to more Egyptians and their families than ever before.”

Bassel Rahmy, ALEXBANK’s Director of Retail and SME Banking, added, “This alliance will effectively deliver the service to every governorate in Egypt. Egypt is a vibrant market with a sizeable diaspora of over 6.5 Million individuals who frequently remit and transfer money back home. This alliance puts us in pole position to capitalize on this market and provide WU services to our existing customers while also opening our doors to non- AlexBank customers who will experience our unique service proposition for the first time.”

According to the 2013 Migration and Development Brief of the World Bank, remittance flows to the Middle East and North Africa (MENA) region are expected to grow by 5-6 percent during 2013-2015, mainly driven by Egypt but also boosted by robust performance forecasted for the other key remittance recipient countries of the region. Remittance inflows in MENA are estimated to be about $49 billion in 2012.