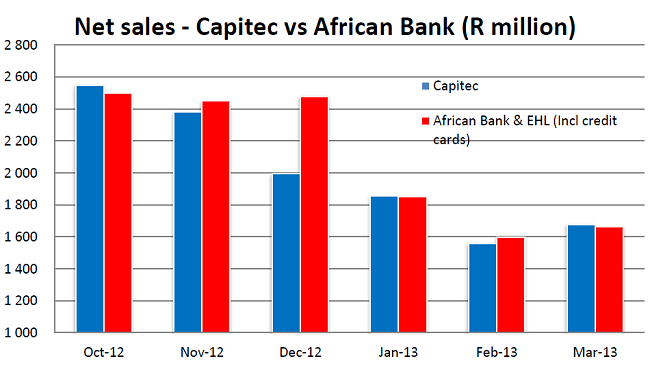 Capitec Bank has issued a statement to say that they do not agree with the comments in the Business Times article by Thekiso Lefifi titled ‘Capitec bubble about to burst?’.  They claim it created an incorrect perception of the way the bank does business. They say there are factual errors in the comments which are misleading and that the following are the facts:

The bank has adjusted its credit criteria significantly since July 2012 in anticipation of a weakening credit market. Loan tenure has not been increased since this date. The fact that the bank sees consumer stress in the market has not been denied and has been openly discussed and disclosed to the market on a continuous basis – also specifically with Matthew Warren from First Avenue Asset Management. The bank obtains information on the market on a continuous basis and as soon as it picks up trends, it amends credit criteria to coincide with the risk appetite and market conditions.

The sales of credit for the second half of the 2013 financial year (Sept 2012 to Feb 2013) decreased by 2% when measured against the first half of the 2013 financial year (March 2012 to Aug 2012). This was due to the more stringent credit criteria applied over this period. The decline in sales of credit at Capitec Bank has in fact been directly comparable to the decline in sales at African Bank over the past six months from September 2012 to March 2013. See graph.

The graph compares sales at Abil and Capitec Bank over the past 6 months and clearly indicates that Capitec Bank and Abil incurred similar contraction of sales over the same period and refutes the statement ”had Capitec shut off the taps like African Bank” in the article. Commentators must remember that a loan book (outstanding balance) can continue to grow significantly even though sales of credit decline.

The article assumes that Capitec Bank migrated to longer term loans in the past few months – We have been extending our term over the past 13 years as and when we felt comfortable with our credit model. The article’s reference “they are taking a stab in the dark” is thus totally out of line with our approach and our well documented public history on the issue.

In the opinion of Capitec Bank, we apply of the most conservative credit criteria in the unsecured credit industry, even including “industry segment rating” as part of client credit rating. Bad debt ratios at the bank have been of the lowest in the industry for the past 8 years. This is furthermore seen in the low pricing of credit extended. The bank has always aimed at decreasing the cost of credit to the market and the only way to achieve this is to target the lower risk client segment in the market.

Provisions for bad debts are conservative. The main features of the bank’s fully compliant accounting model include:
1) It provides an overall portfolio provision for clients not in default from the day it advances a loan as opposed to waiting for default to occur.
2) All credit outstanding beyond 90 days is fully written off.
3) For the valuation of the fully written-off book the bank applies a all-in-cost-of-credit discount rate. This value is then adjusted further to compensate for changing trends and circumstances in the market.
4) The bank provides for an event risk for loans extended for more than one year. This is a practice no other provider applies in the industry.

The bank continues to grow its bank and credit client base by close to 1 million clients per year, by taking market share from other players and by attracting new higher net worth clients to the unsecured credit sector of the market. This is reflected in the NCR statistics and AMPS.